Along with Free Library MSS Lewis E 221-234, this manuscript is associated with the Jerónimos Monastery in Belém, Portugal, (see colophons in 221 and 222) which was a royal foundation still under construction at the time this manuscript was produced in the mid-sixteenth century. The monastery was dedicated to Saint Jerome, whose Introit in this manuscript is marked with an exceptionally large initial (fol. 86r). This book contains the hymns and their musical settings for part of the sanctorale cycle from Saint Andrew (shown in an historiated initial on fol. 1r) to Saint Clement (fols. 1r-102v), as well as the common of the apostles (fols. 103r-190r). A later hand has added an index on fol. 190v. There is also early foliation in red ink and remains of parchment tabs on fols. 37 and 121. Later hands have also added supplementary musical notation on fols. 106v, 169v, and 186r. In addition to the two initials mentioned above, there are hundreds of large, colored initials with pen-work decoration. Occasionally, this extends into marginal flourishes inhabited by birds and other beasts (fols. 34v, 40v, and 47v). This manuscript's eighteenth-century binding retains its original metal bosses, corners, and clasps.

One illuminated initial (fol. 1r); numerous black and colored initials with pen-work decoration, some with marginal flourishes and birds or dragons 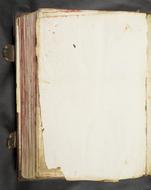