This manuscript, along with Free Library MSS Lewis E 221-233, is associated with the Jerónimos Monastery in Belém, Portugal. The Jerónimos Monastery was a royal foundation under Manuel I, and was still under construction at the time this manuscript was made in the middle of the sixteenth century. This book contains an antiphonary for the temporale cycle from Advent to the Saturday of Septuagesima. Its text is decorated with three illuminated initials (fols. 1r, 34r, 77r) and numerous black and colored initials with pen-work decoration (two, on fols. 58v and 66v, have drawings of birds), three unfinished (ff. 115r, 116r, 117r). This manuscript was rebound in the eighteenth century – and retains its metal bosses, corners, and clasps – around which time numerous paper tabs were pasted at important points in the book. Some are inscribed in an eighteenth-century hand, others are clearly cut from printed books. The binding also incorporates fragments from another liturgical – perhaps Spanish – manuscript (the fragment inside the front cover seems to contain part of the text for the feast of Corpus Christi; the recto of the end flyleaf contains part of a hymn from a Spanish tradition [see Susana Zapke (ed.), Hispania Vetus: Musical Liturgical Manuscripts from Visigothic Origins to the Fraco-Romano Transition (9th-12th Centuries) (Bilbao: Fundación BBVA, 2007), p. 146]). 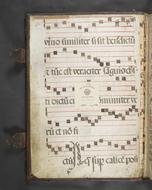