This manuscript is a palimpsest, in which a grammatical treatise was written in Greek cursive with no decoration in the fifteenth century on leaves from an earlier manuscript. The previous text, mostly not legible, was a late thirteenth- or early fourteenth-century copy of Ad correctionem eorum qui virtuose vivunt, by the fourth-century theologian Ephrem the Syrian, written in Greek minuscule (Kavrus-Hoffman). The lower, older text is perpendicular to the upper text. Three leaves of the older manuscript were used as bifolia and are sewn into a gathering with no binding. 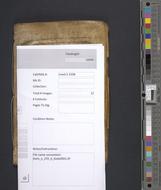