First half of the 15th century

This manuscript contains the Brut Chronicle, Common version to 1377 with full continuation, Stage 1, with an additional single folio on the Betrayal of Calais to the French in 1557. 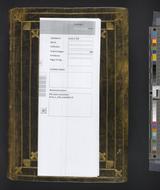