This manuscript is a partial copy of the Revelationes of Bridget of Sweden, from the fifth book through part of the eighth book, followed by a few leaves of a somewhat garbled copy of Cherubino da Siena's Regola della vita spirituale. The texts were written in Italy in the fifteenth century by multiple hands, with the main text mostly in humanistic cursive. Rubrication has been added sporadically in the beginning of the Revelationes (through fol. 94v).

Vertical catchwords in ink, lower right last verso, except for quires 3, 11, and 12, whose catchwords are horizontal, lower center last verso

Blank spaces of six to nine lines, preceding each chapter, used for rubrics in red through fol. 94v, and after that left blank; spaces left for decorated initials, two to six lines, with guide letters, with a few initials and paragraph marks in red in fols. 11r-19v 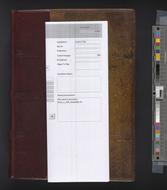