This manuscript is a thirteenth-century copy of the books of the Minor Prophets, from Hosea to Malachi, with interlinear and marginal glosses. The end of Malachi is missing, with the text and gloss breaking off at Malachi 4:5. A historiated initial with a prophet portrait marks the beginning of each book. The text is arranged in three columns, with the Bible text written in larger script on every other line, mostly in the center column but sometimes extending into the left or right column. The marginal gloss is written in smaller script in the left and right columns. The text begins above the upper bounding line on each page. The manuscript was written and illuminated in Paris between approximately 1220 and 1230. The third front flyleaf is a fragment from a missal written in northern France in the second half of the thirteenth century, with readings for the fourth Sunday after Easter followed by the Epistle and Gospel readings for Wednesday after the Fourth Sunday, which also appear in the Bec Missal (also thirteenth century) but not later missals. The missal fragment is frame-ruled in ink (written area: 248 x 165 mm) and the text is written in two columns of twenty-eight lines, with the margins deeply trimmed, especially the inner margin. 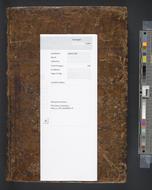