This manuscript contains imperfect copies of Geoffrey of Monmouth's "Historia regum Anglorum" (fols. 1r-25v) and of William of Malmesbury's "Gesta regum Anglorum" (fols. 26r-55v), two important twelfth-century English historical texts. The "Historia" ends part-way through chapter XVI of book VII, and the "Gesta" contains only the first three books (and ends imperfectly). The manuscript was made in England in the late twelfth or early thirteenth century. On palaeographic grounds, Cirencester has been suggested as this book's place of production. At present, the book contains only fifty-five leaves. A number of folios and quires have been excised at multiple points in the manuscript (these are accounted for in the collation model), and already when the book was rebound in the eighteenth century at least four quires were absent. The text is simply embellished with decorated initials in red and blue, one significantly larger than the others (fol. 1r). Some of these initials, between fols. 51 and 55, have been excised. Later hands have added a number of marginal notes and annotations, some near contemporary with the manuscript itself and others perhaps as late as the twentieth century. There are also a number of marginal drawings. Some appear unrelated to the text, but others apparently refer to important events or subjects of the histories. On fol. 12v, for example, there is a marginal drawing of a building nearby text mentioning the important towns of Britain. On fol. 40v, there is a drawing of a bridge next to the text describing the brazen bridge in William's "Gesta." Finally, on fol. 48v, there are two crowned heads next to the record of Bertrade de Montfort's repudiation of her husband, Count Fulk IV of Anjou, for King Philip I of France. Most recently, Yaitsky Kertz has dated this manuscript to the years before 1200.

Occasional early but not contemporary catchwords 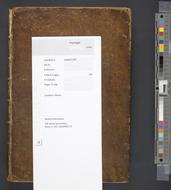