This large-format, tenth-century Greek manuscript on parchment consists of one leaf of the Wisdom of Solomon (fol. 1r-1v, 14:17 line 1-15:8 line 2) and ten leaves from Basil of Caesarea's Enarratio in prophetam Isaiam (fols. 2r-11v, 14:291 line 38-16:315 lines 3-4, but with one folio missing between folios 4 and 5 and four folios missing between folios 9 and 10), all from a much larger manuscript, codex Atheniensis 2641, National Library of Greece. The parent manuscript, which is an Old Testament with patristic commentaries, has a colophon recording that it was written by the scribe Joseph in Constantinople in 913-914. It is the earliest known dated manuscript written in minuscule bouletée. These separated leaves were identified by Nadezhda Kavrus-Hoffman by their script, ruling pattern, and correspondence with text lacunae in the parent manuscript.

Quire 3 signed ME', in small majuscules by the scribe in the upper right corner and by a later hand in the lower center margin (fol. 8r; Kavrus-Hoffmann)

Modern half leather, rebound by Marty Dickson, July 1980 (pencil note inside back cover) 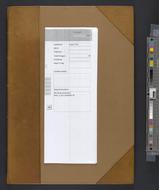