Manuscript of an evangelist and prebendary of the minor orders

This manuscript is a late fourteenth-century compilation of Franciscan documents, including a provincial constitution of 1359, the form of the vow taken by a man joining the order, and eleven of the twelve statutes adopted by the General Chapter of Assisi in 1354, with the very end of the eleventh and the twelfth missing. The manuscript is written by multiple hands and has occasional marginal notes.

Rubrication in red; two- and three-line initials in red 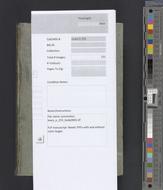