The item is not dated; perhaps later 16th or 17th century.

Complete, large-format copy of the Qurʼān with a dual-page illuminated first opening and numerous polychrome marginal medallions, some of which have been painted over earlier medallions.

Bound in black leather over pasteboard with flap (Type II); gold stamped cartouches make up border and frame; the flap seems designed to fold over the outside of the front cover; plain red leather doublure. 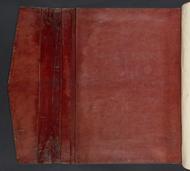 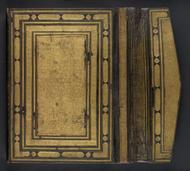