Copy is undated, probably produced in North Africa, possibly between the 17th and 19th centuries.

Complete copy of the Qurʼān, except for half of verse 134 in Ṭā Ḥā. Copied on loose leaves of laid, watermarked European paper, decorated in red and yellow and kept between boards in a wrap and satchel. The boards have some recitation suggestions written on them. Two leaves with most of Muʼminūn verses 47 to 65 laid in; the leaves are in a different hand and do not replace missing text.

The pages are loose and were never bound. They are held between two boards of pasteboard framed in leather with text written on them. A wrap of blind tooled leather in reddish brown with a pattern of triangles made by the tooling and also dyed darker brown. The wrap is framed in the darker brown dye as well. The wrap encloses the textblock and ties with a leather thong. The wrapped text is then contained in a satchel of light brown and reddish brown leather with a decorated flap in green, black and brown of woven strips and tooled leather. The satchel has woven handles on both sides and a woven clasp.

Chiefly red and yellow. Several illuminated grids of alternating red and yellow geometric patterns (f. 1r, 93r, 193r-194r, 291r-291v). The first leaf has a monochrome grid of intersecting lines and crosses under the chapter title (f. 1r). Verse endings marked either by two concentric circles with yellow centers and red dots between the circles, or by yellow dots over a red pattern of two circles and lines. Marginal medallions marking text divisions appear throughout. At least four varieties of marginal medallions in red and yellow with differing decorative patterns occur, mostly consisting of combinations of straight lines and small circles. Sets of two concentric circles with the inner one bisected horizontally also frequently appear in the margins. Sūrah titles in red. Vowels and readings in red. 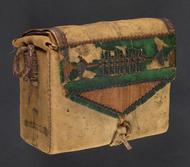 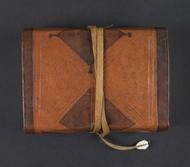 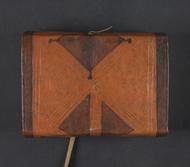 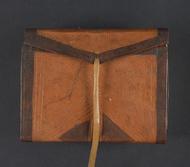