Copy is undated, but likely made in the 16th century and then repaired in the 18th century, perhaps in Iran.

Complete copy of the Qurʼān. Leaves at the beginning and end have been replaced in a similar style but different hand including the dual page illuminated opening leaves which are a later addition. Leaves missing pieces have been mended extremely neatly, see for example f. 437. 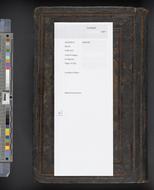