Copy is undated; perhaps copied in the 17th century.

Complete copy of the Qurʼān written in a small, clear hand on paper that has been remounted; one page was recopied at a later date (f. 52).

Bound in black leather over pasteboard (Type III). Embossed paper onlays: a central medallion with four pendants, two on the vertical axis and two on the horizontal, those on the horizontal axis are embossed with text. Dark blue pastedowns with design of yellow and pink flowers with lines and dots. Carrying case in black and red leather with gold tooled frame and flap. The flap is inscribed, "[illegible] khaṭṭ nafīs daqīq". Case flap is detached. 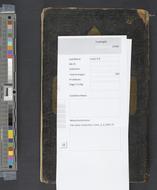