Copy is undated, but likely made in North Africa. It is doubtful the copy is earlier than 15th century.

Incomplete copy of the Qurʼān containing verses 2:201-6:24. The parchment is curling, often brittle, and shows clear striations from preparation on a number of membranes (see f. 8 for example).

The copy is unbound, though the individual quires are still joined. Quires are commonly 10 leaves made of 4 bifolia and 2 singletons with stubs.

Red and yellow dots and green double slashes indicate diacritics. Sūrah titles in yellow outlined in brown with polychrome palmette of yellow, green and blue in the margin. Some marginal headers also in brown outlined yellow. An occasional floret of yellow appears among the verses. 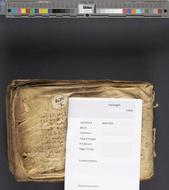