Arabic with some headers in Ottoman Turkish

Collection of selections from the Qurʼān and prayers, with many leaves of illustrations and illuminations.

Bound in brown leather over pasteboard with flap (Type II). Covers are blind-stamped and gilded with a central mandorla and two pendants on the vertical axis with gold tooled decorations and frame. The flap has a coordinating blind stamped and gilded medallion. Yellow paper doublure. 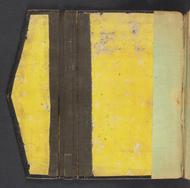 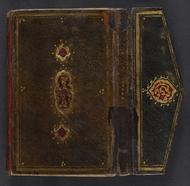