The item is undated and the scribe is not named; likely copied in India, perhaps in the 18th century.

History of Kashmir until 1122 AH (1710) written by a native of the area. According to the preface, it was written as an abridgment of the Sanskrit chronicles of Kashmir. The colophon says the work is Kitāb-i Rājah Tarnigī (f. 129v), but it is really an abridgment of that work. A second, incomplete text, Farhang-i Kashmīrī, a glossary in verse of Persian and Kashmiri by an unknown author and written on slightly smaller paper was added later after ten blank leaves.

Bound in bronzed leather over pulpboard with blind-stamped and painted central mandorla with two pendants on the vertical axis and double frames; red leather doublure.

Illuminated headpiece in gold and blue with text on cloudbands with gold fill and floral fill border rules in orange and pink (f. 11v-12r); textblock border-ruled in red, gold, blue with page-opening frame rule in blue; rubrications in red. The textblock of the second work is border-ruled in double red 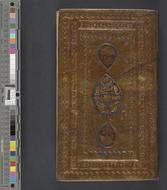