The copy is undated and not signed, but perhaps completed in the late 16th or early 17th century.

Copy of the complete works of Khāqānī with four illustrations and three illuminated page openings.

Bound in reddish brown leather over pasteboard with flap (Type II); gold stamped central mandorla, two pendants on the vertical axis, and cornerpieces with matching stamps on flap. Inside covers have brown leather doublure with inlay central mandorla in blue, yellow, red, and green with black filigree tracery, two pendants, cornerpieces and four notches, two on either long edge, all of which were filigree inlay, though some are now missing. 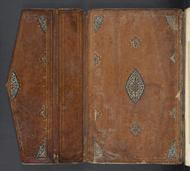 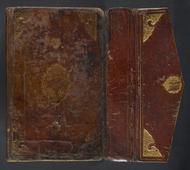