Item is undated and unsigned, but likely copied in Egypt, perhaps in the 14th or 15th century.

Copy of hymns and prayers for certain days and months.

Rubrications in red; some decorated initials in red, yellow and green. 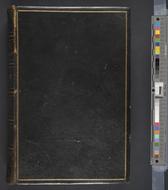