Widener 3 Book of Hours, Use of Sarum ("The John Browne Hours")

Book of Hours, Use of Sarum ("The John Browne Hours")

Third quarter of the 15th century

This lavish Book of Hours ("The Browne Hours") was made for the wealthy English merchant John Browne and his wife Agnes. The couple are portrayed as supplicants before the Mass of Saint Gregory on fol. 8v, and John Browne's trademark appears in the border of that page and also inside the back cover. The volume is remarkable in many aspects. It retains its original fifteenth century binding, complete with silver clasps inlaid with miniatures of the Virgin and Child and Veronica's veil. John and Agnes's names are inscribed on the reverse of these clasps. The name of the binder is stamped on the leather of the covers: Anthony de Gavere. The text of the Hours of the Virgin in this book is especially sumptuously illuminated, with one full-page and one large miniature opening each of the individual hours. Unusually, the Hours are interrupted between Lauds and Prime by a series of suffrages. In addition to the usual Penitential Psalms, this book contains the Passion Psalms and the Psalter of Saint Jerome. The papal tiara has been erased on fol. 8v and the commemoration of Thomas Becket has been struck through, testifying to this manuscript's post-medieval English history. 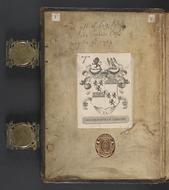 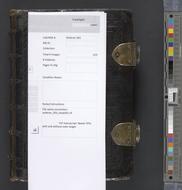