Historical Medical Library of The College of Physicians of Philadelphia

This manuscript is a fourteenth-century or very early fifteenth-century copy of Arnaldus de Villanova's guide to health for James II, King of Aragon from 1291 to 1327, on topics such as bathing, eating, drinking, and sleeping. This guide, referred to in the manuscript both as Liber de conservatione sanitatis and Regimen generale (fols. 1r-26r), is followed by the much briefer Regimen speciale (fols. 26r-28v), which, unlike the main text, mostly consists of recipes. The text is written in two columns of a rounded Gothic script with the start of chapters marked by alternating red and blue initials.

Modern foliation in pencil, [i, 1–29], upper center or right recto 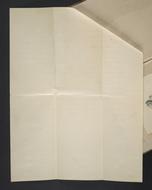