Deed of a sale of a life estate by John Elys and his son John to John de Beeleye and his wife Margery, all of Toneworth, Warwickshire. Dated the first Wednesday after the feast of Saint Hillary in the thirty-first regnal year of Edward III (January 1358), in Toneworth. The document states that Robert de Crowenhale, Edward de Middelmor, John Waryn, Richard Russel, John Page, and others were present as witnesses. It is written in 25 long lines, in a notarial hand, and has a parchment tag at the bottom. Words have been erased in two places (in one case with a correction written in the space) and nearly 4 lines have been canceled by crossing out in ink. The document has the undulating upper edge of an indenture and was marked before cutting. 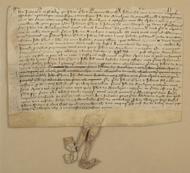 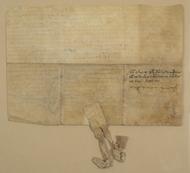