Petition from Alexander Lamb, a banker of London, and William Suttill, a flax spinner of Middlesex, requesting a royal patent from George IV for the use in Ireland of their improvements in machinery for preparing, drawing, roving, and spinning flax, hemp, and waste silk. A note on the verso dated 23 September 1825 records transfer of the petition to the Lord Lieutenant of Ireland for his consideration. 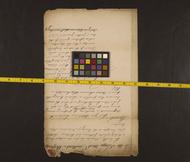