Possibly written in Paris, ca. 1770 (before the death of Henri Pitot).

Notes from lectures on physics, statics, and mechanics, assuming a Newtonian perspective and citing 17th-century scientists such as Galileo, Descartes, Pierre Gassendi, and Pieter van Musschenbroek. The latest citation is to Henri Pitot, professor of engineering at the University of Paris who died in 1771. 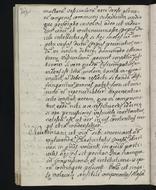