Overpainted leaves from a Persian manuscript and an Arabic lithograph

Leaves, one from a Persian manuscript and the other from an Arabic lithograph, both of uncertain date and origin, each with an illumination overpainted in the 20th century to mimic Mughal style, likely in India for the tourist trade. The leaves themselves are possibly from the late 19th or early 20th century, and the paintings are considerably later. On the Persian leaf, the miniature of a scene of a man kneeling at the mouth of a cave with another man kneeling before him enclosed in a rondel is painted over the text on the page. The other side of this leaf is written in 12 long lines. On the verso of the Arabic leaf, which was page 99 in the volume printed by lithograph, the miniature of a man and woman on a throne on a veranda, surrounded by nine musicians, has been painted over the main text, with the surrounding commentary left visible; the recto of this leaf has 8 lines of main text, with interlinear notes and surrounding commentary in a smaller script. The leaf is from a grammatical work with commentary. 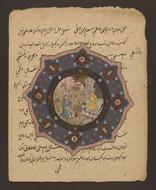 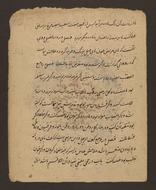