Charter issued by the cardinal Ercole Gonzaga and the duchess Margherita Paleologa, in their capacity as tutors of the Duke of Mantua, Margherita's two-year-old son Francesco III Gonzaga. They grant to the Jew Isaac de Massaran license to establish a money-lending bank with two other shareholders from the Jewish community of Mantua. The bank may charge 20% annual interest (noted as lower than the 25% charged by the other four banks in Mantua) and will have the same benefits, immunities, privileges, and honors as the other banks in Mantua. Written in Mantua in 14 lines of humanistic cursive script, opening with display capitals for the names of the tutors in the first line, dated 24 May 1542. Ruling in lead for the text of the charter is visible. Three or four signatures or marks; notarial signatures by the ducal notaries Olimpus Zampus and Calandra (Johannes Jacobus Calandra); and the Gonzaga seal in wax now attached to the lower half of the document rather than attached by a tag. The inscription Decreto di banco feneratitio (or, in the inscription in a later hand, feneratizio) is written twice on the verso. 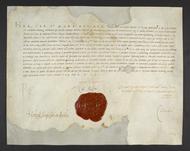 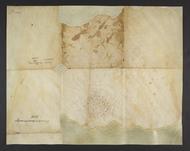