Mss003/111 Notes, on a visit to Several Tribes of Indians

Notes, on a visit to Several Tribes of Indians

Journal of John Pierce, Quaker of Darby, Pennsylvania. John Peirce documented his 61-day journey through Pennsylvania, New Jersey and New York in his journal titled "Notes, On a Visit to Several Tribes of Indians, 1796". Peirce and his fellow Friends James Cooper, Joseph Sansom, Isaiah Rowland, Enoch Walker, and Henry Simmons left on May 30, 1796 for the Oneida reservation. Their goal was to meet with various Native American groups and establish agricultural programs. After passing through New Jersey and up the Hudson River to Schenectady, they followed the Mohawk River to the Stockbridge, Brotherton, Tuscarora and Oneida Villages. After meeting with the members of the various groups at the Oneida reservation, the party made their way further west to the Onondaga and Cayuga settlements. Their journey home took them through central New York and Pennsylvania through Bath and Painted Post, New York as well as Muncy, Catawissa, and Reading Pennsylvania. Peirce arrived home in Darby, Pennsylvania, on July 29, 1796. 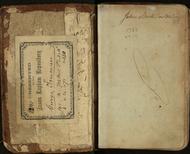