This manuscript is a large late fourteenth century Missal, written in Germany.

Contemporary blind stamped calf over wooden boards, a circular stamp with a flowering pot with lozenge shaped compartments on the sides, rebacked, with clasps. [Per Pfändtner, stamps are identical to those of a Nuremberg Augustinian convent datable from 1501 to 1526] Inside the front cover is a Post-It note reading, "T. F. Richardson Lectionary German 14th Century or early 15th. 261 ff. 1 large min. See page 121-122 Small min. recto f. 128." Other inscriptions in front cover include "N 26," "M 1350" and "No. 5." Pasted to the inside of the back cover is an auction catalogue description in German.

One full-page miniature in ink, paint, and gold and one small marginal miniature in ink and paint; seven large flourished initials with marginal extensions and numerous smaller decorated initials throughout, with occasional decorated ascenders; marginal annotations are visible throughout in a variety of hands; seventeen finding tabs are attached to ends of various leaves 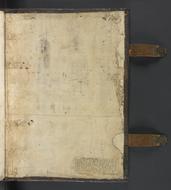 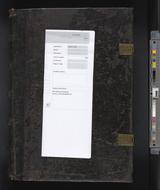