Item is undated, but probably copied in the 18th or 19th century, perhaps in Turkey.

Red leather with flap blind-stamped with central mandorla with two pendants along the vertical axis and frame with repeating pattern; flap is also stamped. 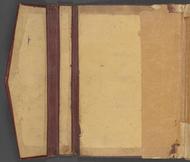