Manuscript leaf from an account of the Jewish Wars

Leaf from a large manuscript written in a Romanesque script in Italy in the 12th century. Ruled in lead for 2 columns of at least 50 lines, the leaf is damaged at both the top and the left edges, with roughly half of the inner column missing. Water and worms have both damaged the leaf. 1 2-line initial in red on verso. The leaf was later used as a binding fragment. It contains text describing the conquest of Ptolemais by Alexander, son of Antiochus II, an event also described in the Book of Maccabees. 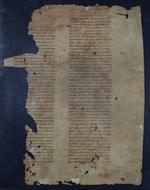 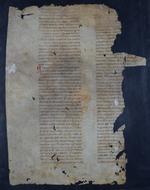